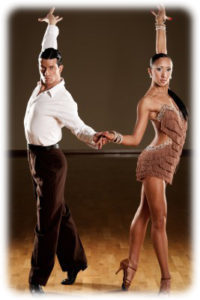 Cha cha evolved from a version of Cuban Mambo called Chasse Mambo. As music always dictates the dance, chasse (meaning to chase) steps were inserted between the forward and back breaks when a slower version of Mambo music was played. Reportedly, Cha Cha got its name from the sound of women’s shoes shuffling across the floor.
Cha Cha was introduced to the United States in the early 1950s and promptly sparked a dance craze. Enrique Jorrin, a Cuban violinist, is attributed with creating the first Cha Cha song. After arriving in the U.S., the traditional violins and flutes were often exchanged for big-band instruments such as trumpet, trombone, and saxophone.
Cha Cha is lively and fun. Unlike the smooth dances which travel around the line of dance, Cha Cha is a non-progressive dance that emphasizes Cuban Motion and rhythm expressed throughout the body. 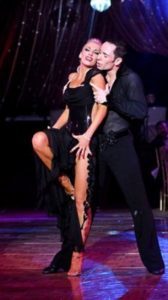 Rumba is a romantic Latin dance with Afro-Cuban origins. Rumba is a broad term referring to multiple music and dance forms, including Danzon, Guaracha, and Son. These forms are a blend of African slave and colonial Spanish culture. The livelier forms feature fast hip movements and sexual strutting performed to a fiery orchestra of percussion. However, Ballroom Rumba comes from Son, one of the slower, less eroticized versions of the dance.
By the late 1920s, America’s appetite for Latin music was ignited. Orchestra leaders such as Xavier Cugat introduced and popularized Rumba music and dancing, which continued to grow in the 1930s and 1940s. Rumba was standardized as a ballroom dance in the mid-1950s.
Sometimes called the “dance of love,” Rumba is a non-progressive dance (it does not travel around the dance floor), distinguished by its romantic feel and sensual hip action (Cuban Motion). 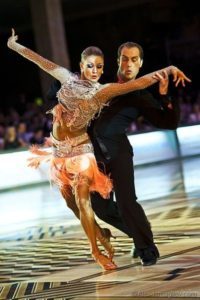 Samba originated on Brazilian plantations, where the African rhythms of slaves mixed with European music. Samba music served as an oral history, and the dance was a solo art form with rapidly moving hips and quick transfers of weight. Samba was introduced to the U.S. in the late 1920s via the Broadway musical, Street Carnival, and became more widely exposed through film. Fred Astaire and Dolores del Rio danced to a Brazilian beat in Flying Down to Rio, and Carmen Miranda shook her hips in films including That Night In Rio. In the 1960s, Brazilian music became widely popular with the rise of Bossa Nova, a combination of Samba rhythms and cool jazz.
In the U.S., Samba evolved into a partner dance that was standardized as a ballroom dance in 1956. In Brazil however, Samba remains largely a solo form, danced at street festivals and other celebrations with nationalistic pride.
Samba is an upbeat, lively dance that progresses counter-clockwise around the floor. It is characterized by its bounce and rolling hip action. 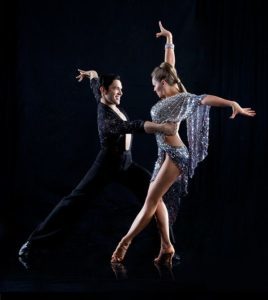 Bolero was originally a Spanish dance with Moroccan roots. Bolero is often called the “Cuban Dance of Love,” and is thought to have similar origins to Rumba. Bolero is believed to have evolved from Afro-Cuban and Spanish folk dances such as the Danzon, Beguine, and Fandango. Arriving in the U.S. in the mid-1930s, it was danced in its traditional form to a constant beat of drums. Contemporary Bolero music is slow and dreamy, usually with Spanish vocals and soft percussion.
Bolero is a romantic dance characterized by slow, smooth, gliding movements, graceful turns, and dramatic arm styling. Bolero uses elements from three dances: contra body movement from Tango; rise and fall from Waltz; and slow Latin music and a modified version of Cuban motion from Rumba. 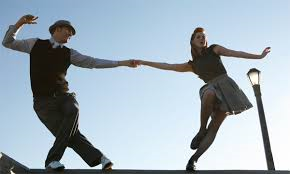 East Coast Swing traces its roots to the original swing dance, Lindy Hop. Lindy Hop was created in the late 1920s by African American youth at the Savoy Ballroom in Harlem. Danced to the swing and jazz of big bands such as Duke Ellington, Cab Calloway and Benny Goodman, Lindy Hop was, and remains, a dynamic, athletic dance.
By the mid-1930s, Lindy Hop (also called Jitterbug and Swing) had captured the imagination of young people everywhere. It was widely danced in the U.S. and Europe through the end of World War II. In the early 1940s, Lindy Hop was tamed and simplified by dance schools to become a ballroom dance called Eastern Swing. In the late 1970s, the name was changed to East Coast Swing.
East Coast Swing is a fun, upbeat, non-progressive dance distinguished by its bounce, back break (also called a “rock step”), and “swing hip action”.

There are various stories of how West Coast Swing (WCS) evolved from Lindy Hop. One is that people, tired of being kicked by wild Jitterbug dancers, began to dance in a slot. Another is that the end of the Big Band era forced dancers to move into blues clubs where they modified Lindy Hop to fit the smaller spaces and slower music. Others believe WCS was created in Hollywood by dancer Dean Collins, because dancing in a slot made for better camera angles.
Whatever its true origins, WCS was born in California during the 1940s. Called Western Swing, this new dance was popularized in the 1950s by Arthur Murray dance studios and teacher Skippy Blair. In 1959, the dance was renamed West Coast Swing. While WCS is the official California state dance, it is danced widely throughout the United States and Canada.
West Coast Swing is smooth (no bounce) and danced in a slot. The dance allows room for syncopated footwork and improvisation. WCS can be danced to a wide range of music including rhythm and blues, country western, funk, disco, rock and pop. 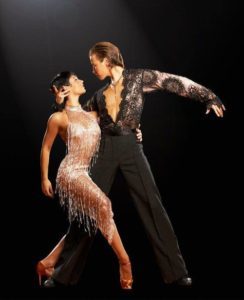 Merengue is the national dance of the Dominican Republic, where it originated in the early 1800s. Merengue bands from the countryside typically included a vocalist backed by an accordion, a metal scraper and a double-headed tambura drum played with a stick. Legend says the dance acquired its characteristic look from and old war hero who returned from battle with a wounded leg. While dancing, he couldn’t help but limp to one side. Out of respect, all the villagers started dancing with a limp.
Whatever the true origins, Merengue arrived in New York as early as the 1940s, gradually becoming a part of the Latin dance and music scene. The music has since evolved into an international phenomenon, with musicians such as Juan Luis Guerra popularizing its easy-to-follow beat.
Merengue is a fun and easy dance made up of simple steps. Primarily a non-progressive dance, it can also travel counter-clockwise around the dance floor. Noted for its Cuban Motion, Merengue is also characterized by its marching feel. Emphasis may be put on count 1 by taking a larger step and slightly dragging the opposite/closing leg. 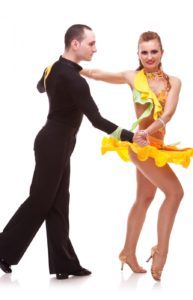 Mambo developed from the Cuban dance Danzon, and was greatly influenced by Cuban Haitians and American Jazz. Perez Prado is credited with introducing Mambo at a Havana nightclub in 1943. Other Latin musicians made significant contributions to Mambo’s growth and development, including Tito Rodriguez, Tito Puente and Xavier Cugat.
Around 1947, Mambo arrived in New York. Quickly becoming all the rage, Mambo was taught at dance schools, resorts and nightclubs, reaching its height of popularity by the mid-1950s. The fad waned with the birth of Cha Cha, a dance developed from Mambo. The Mambo has regained its popularity, due in large part to a New York dancer named Eddie Torres, as well as popular Mambo songs and movies.
Mambo is a fast and spicy dance characterized by strong Cuban Motion, staccato movement and expression of rhythm through the body. The dancer holds on count “1” and breaks on count “2.” Mambo also features exciting swivels and spins.