Until the 18th century, dance was strictly divided between courtly and country forms. I the courts, dances like the Minuet were refined affairs with an elaborate language of bows and curtsies. There was little physical contact between dancers, and proper form, like turned-out feet, was considered essential. Everything changed with the Waltz.
The name Waltz comes from the Italian word “volver”, meaning to turn or revolve. It evolved from a German and Austrian peasant dance called the Landler, and was the first widely popular dance to feature a closed position. Because of this close hold, Waltz was denounced as scandalous and immoral.
The Waltz was ultimately standardized with the Box pattern and the dance hold we know today. The Waltz dominated much of the European and American dance scene until the First World War, when the Tango and Foxtrot enraptured a whole new generation.
Waltz is characterized by rise & fall and sway. The feet stay in contact with the floor, creating a smooth, gliding look. Waltz has an elegant gracefulness with a romantic and sometimes melancholy feel.

The story of the Foxtrot begins at the turn of the 20th century when African American musicians such as Scott Joplin began composing syncopated ragtime music. A smooth dance like the Waltz would not do for this fervent new music. One of the first dances to evolve for ragtime music was the Turkey Trot, a one-step that included flapping the arms like a turkey. Then came the Monkey Dance, Horse Trot, Grizzly Bear, Bunny Hop and Kangaroo Dip. Ragtime demanded dances with jerky steps, emulating the walk and the wild abandon of animals.
In 1914, a young dancer named Harry Fox did his version of trotting on the stage of the Ziegfield Follies. Fox’s fast and jerky trot became the hot new thing in New York. When the Foxtrot traveled to England, the jumps and high jinks of the original were ironed out. What remains is a smooth, elegant dance more reminiscent of the Waltz than of the Trot’s hyperactive past. In fact, many of the Foxtrot’s patterns have been adapted straight from the Waltz.
Key characteristics of the Foxtrot are smooth, gliding steps with controlled movement and an easygoing look. The Foxtrot can be danced to many styles of music. There are two styles of Foxtrot: social style may be danced with a mild bounce action, while competitive style has a smoother, more Waltz-like feeling.

Ballroom Tango was born in the slums of Buenos Aires in the late 19th century. Argentine gauchos and migrating blacks met and mixed in the infamous Barrio de las Ranas, trading cultural rhythms and dance steps in and around the area’s well-known brothels. From this melting pot emerged a highly passionate dance, one that respectable classes of society shunned. But as with the Waltz, there is nothing like controversy to make a dance triumph.
In the United States, Tango became all the rage right before the First World War. Vernon and Irene Castle made their fortune from Tango, becoming American’s sweethearts of the dance. There was a flurry of Tango dance hall openings, and Tango teas became popular in big hotels. Couples even danced between courses at the finer restaurants. Rudolph Valentino did his part, performing a sensual Tango in the silent film “Four Horsemen of the Apocalypse.” The dance varied greatly from performer to performer, and was eventually standardized in the 1920s by the Imperial Society of Teachers of Dancing.
Tango is a dramatic dance characterized by a close hold (that is more compact than the other smooth dances), a low center of gravity and an emphasis on Contra Body Movement. Movement in Tango is stealthy, almost cat-like and has an unmistakable staccato feel. 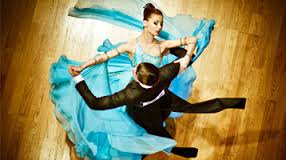 In 1787, Waltz began to appear on the operatic stages of Vienna. As the popularity of Waltz increased in Vienna, so did its tempo. Sometime in the early 1800s, Austrian composers such as Johann Strauss and Franz Lanner increased the number of measures per minute in their Waltzes. The faster music required dancers to have greater technique and endurance.
This new version of Waltz became known as Viennese Waltz. Like Waltz, many considered the dance to be immoral. In a book written about good manners by the English author, Miss Celbart, she advised that while it was permissible to dance Viennese Waltz if a lady were married, it was “too loose of character for maidens to perform.” Despite such contentions, Viennese Waltz continued to be extremely popular in Europe and America until the First World War.
Viennese Waltz is characterized by its speed (approximately twice as fast as Waltz), as well a rise & fall and sway (both significantly less than in Waltz). With its elegance and turns, Viennese Waltz has an air of magic about it. 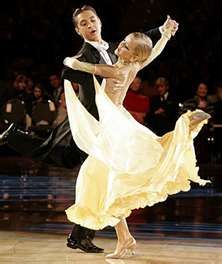 The Quickstep is a light-hearted member of the standard ballroom dances. The movement of the dance is fast and powerfully flowing and sprinkled with syncopations. The upbeat melodies that Quickstep is danced to make it suitable for both formal and informal events. Quickstep was developed in the twenties in New York and was first danced by Caribbean and African dancers. Its origins are in combination of slow foxtrot combined with the Charleston, a dance which was one of the precursors to what today is called swing dancing.